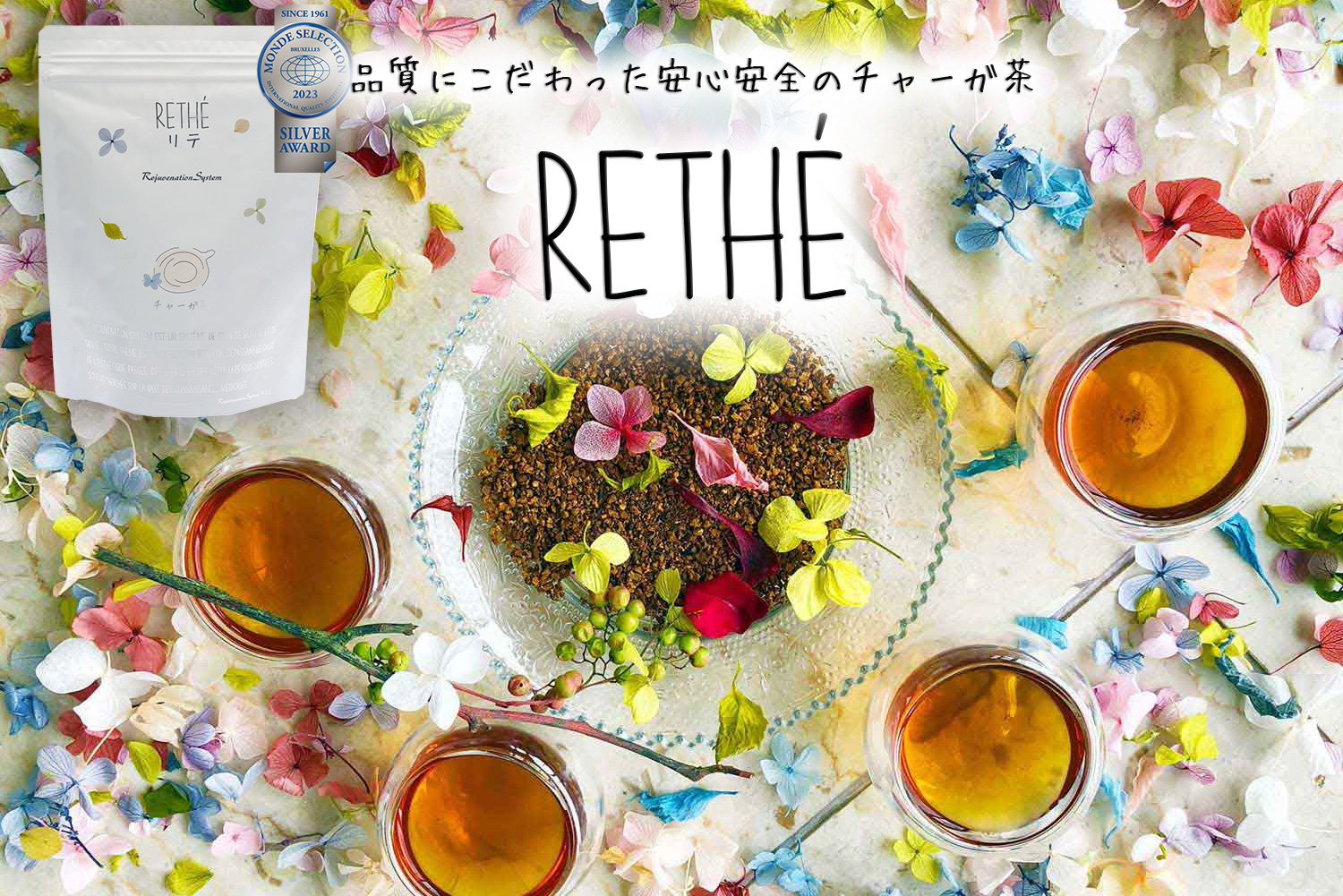 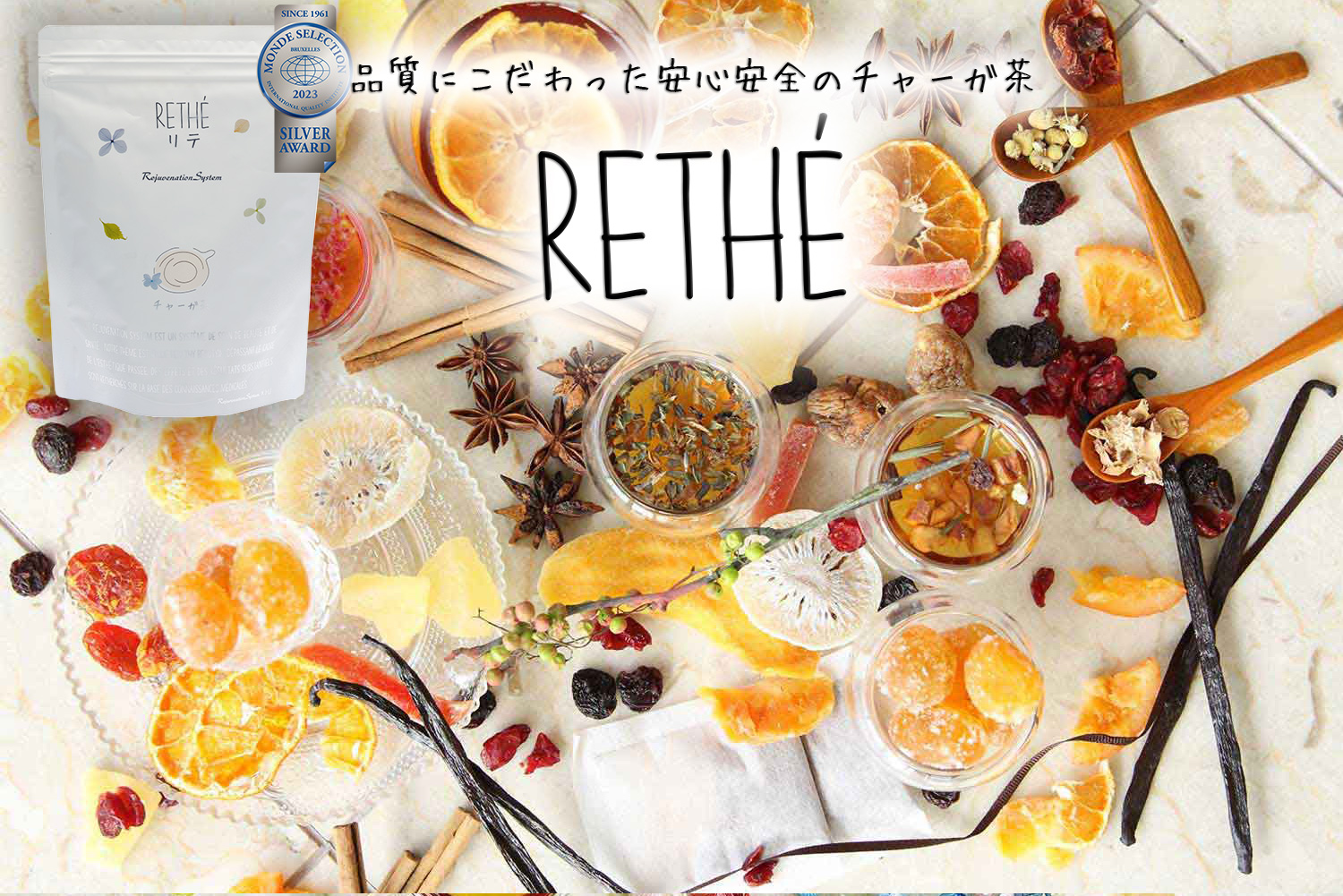 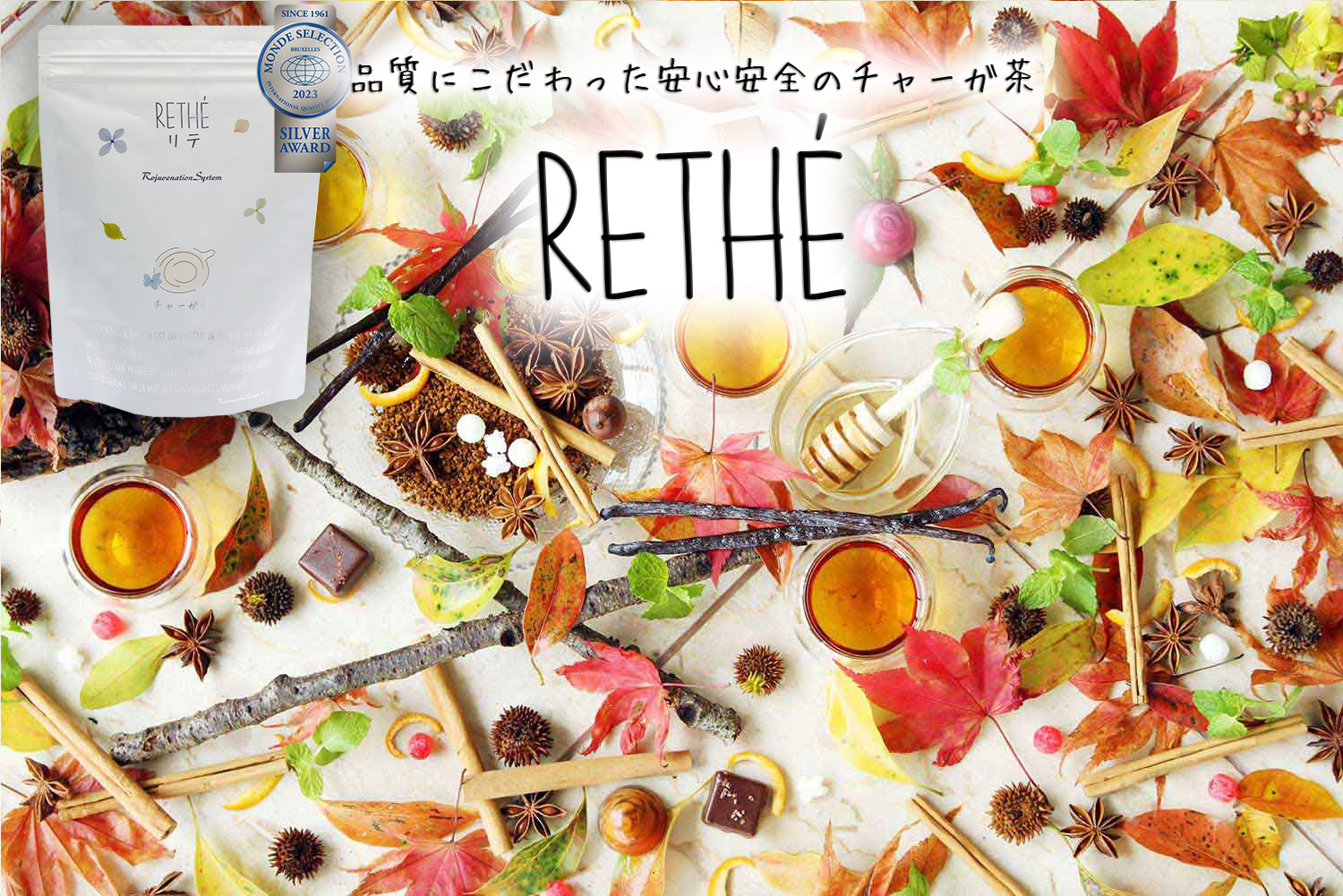 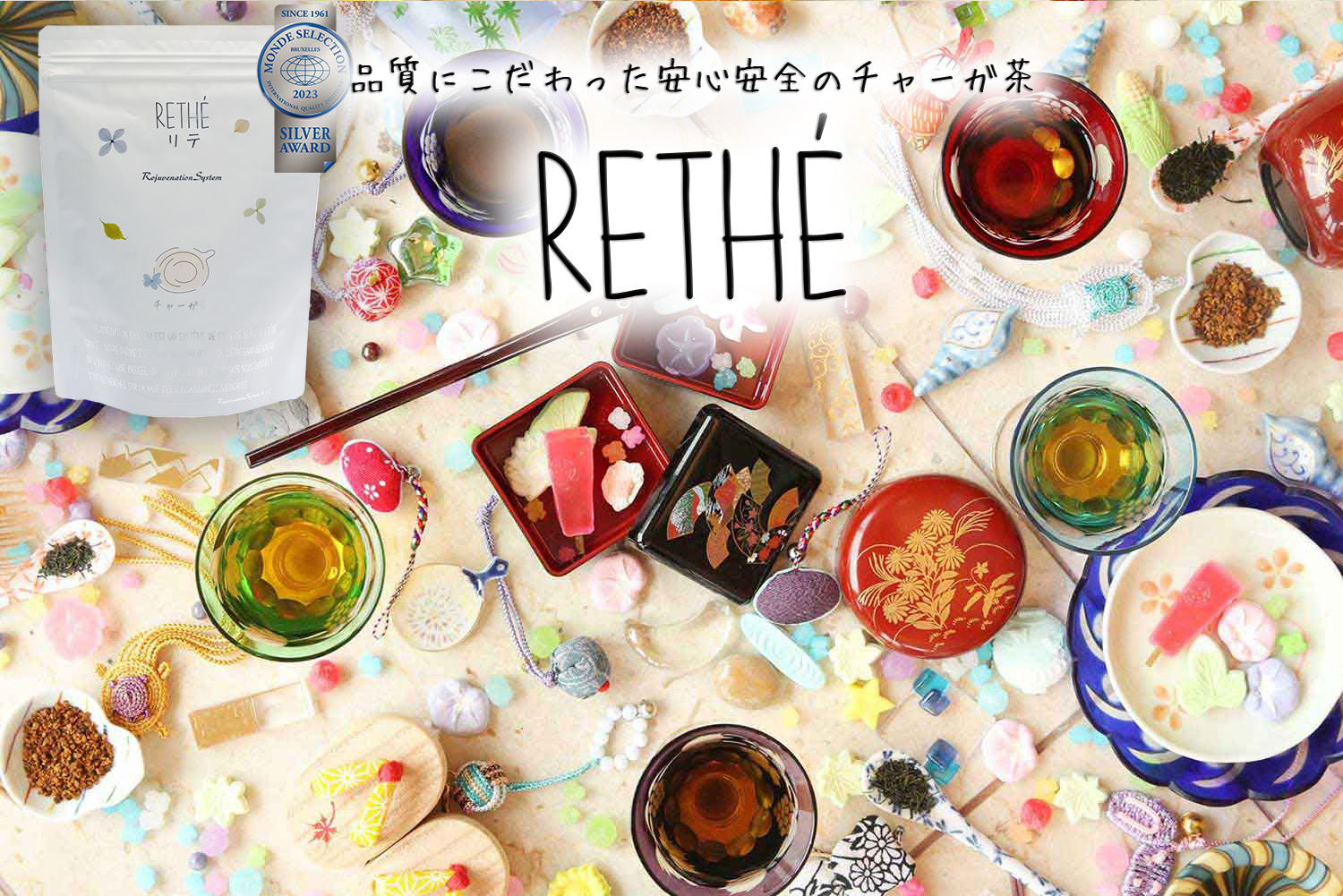 We continue to pursue true health and beauty, celebrating our 20th anniversary in the spring of 2020. At the same time, we have adopted a unique manufacturing method for Chaga, which has been carefully added to the supplement ingredients of Rejuvenation Co., Ltd., and arrived at the tea 'RETHÉ' that you can enjoy every day. Chaga cells contain abundant blessings of strong vitality nurtured in the harsh Russian nature, but they are wrapped in a hard cell wall and cannot be digested and absorbed. 'RETHÉ' was finally born by sticking to a unique manufacturing method using a patented manufacturing method so that the blessings of nature, which is the vitality of Chaga, can be fully absorbed. It goes without saying that Chaga is good for health and beauty in various documents. The best feature of RETHÉ is the charm of Chaga strong antioxidant power (41000 units of SOD enzyme) and high anti-glycation power . (AGEs production suppression rate 70% at a concentration of 80mg / mL) And above all We promise to deliver products that have been confirmed to be safe and secure. It is undeniable that Chaga, which grows in a natural environment over 10 to 20 years, may contain dangerous harmful substances, such as recent environmental problems and nuclear power plant accidents in Russia and Japan. .. Thorough analysis and inspection has made it possible to deliver safe and secure Chaga tea. 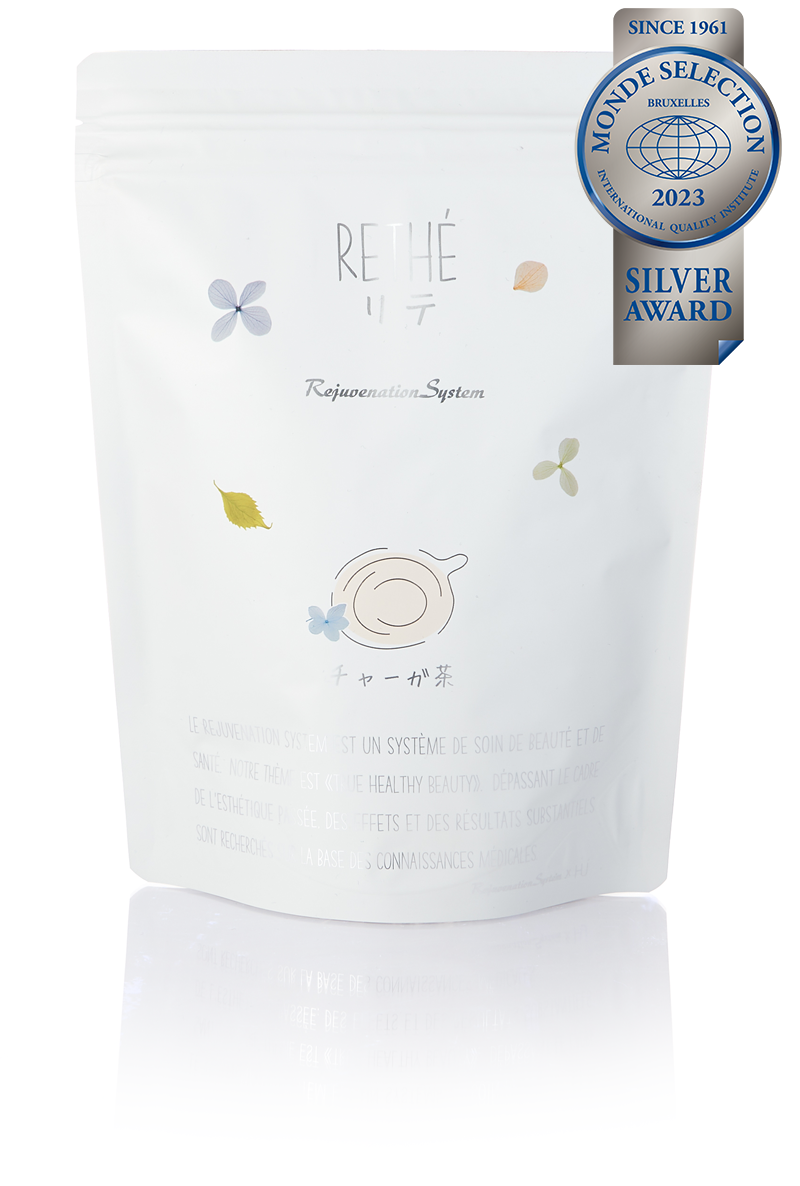 What is Chaga (Chaga mushroom)?

Chaga (Japanese name: Chaga mushroom) is a type of mushroom belonging to the family Polyporaceae. It grows in cold regions and is mainly produced in Russia. Therefore, it is also called 'Siberian Reishi' and can be found in Hokkaido in Japan. It mainly parasitizes birch trees and grows over a long period of 10 to 15 years. Eventually, it grows to a diameter of about 30 cm and becomes black and rugged. Originally, the sap of birch trees is rich in sugars, amino acids, malic acid, minerals, etc., and is also famous as a raw material for xylitol. It is Chaga that absorbs the components of the birch sap so that it parasitizes the birch and eventually kills the parasitized tree. 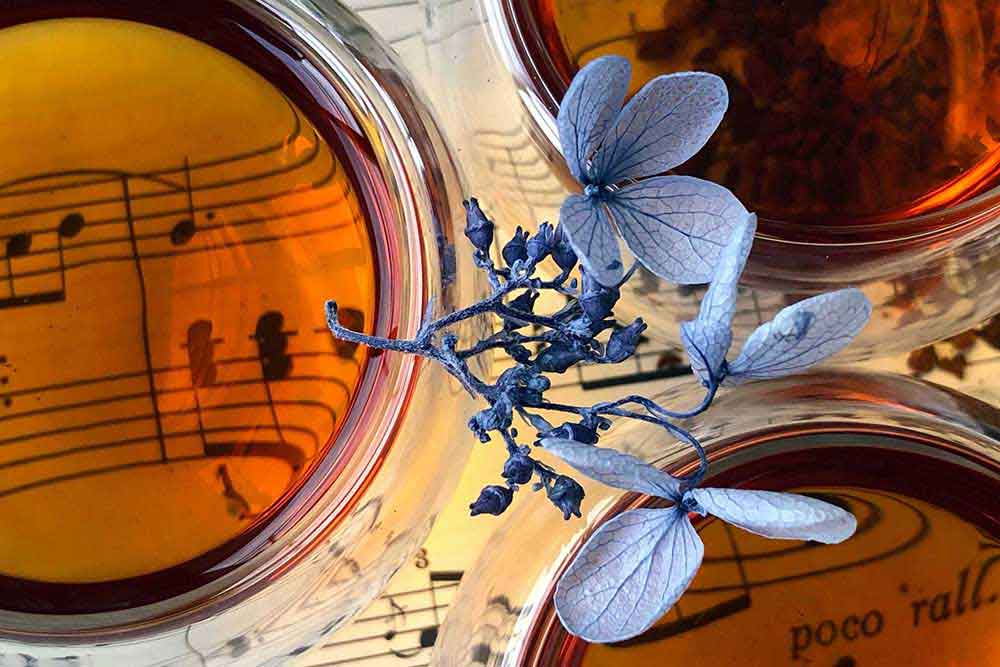 Since we drink it every day, we are particular about the safety of our products. We promise that we will only sell products that have been confirmed to be safe by inspection at Japan Food Research Laboratories. 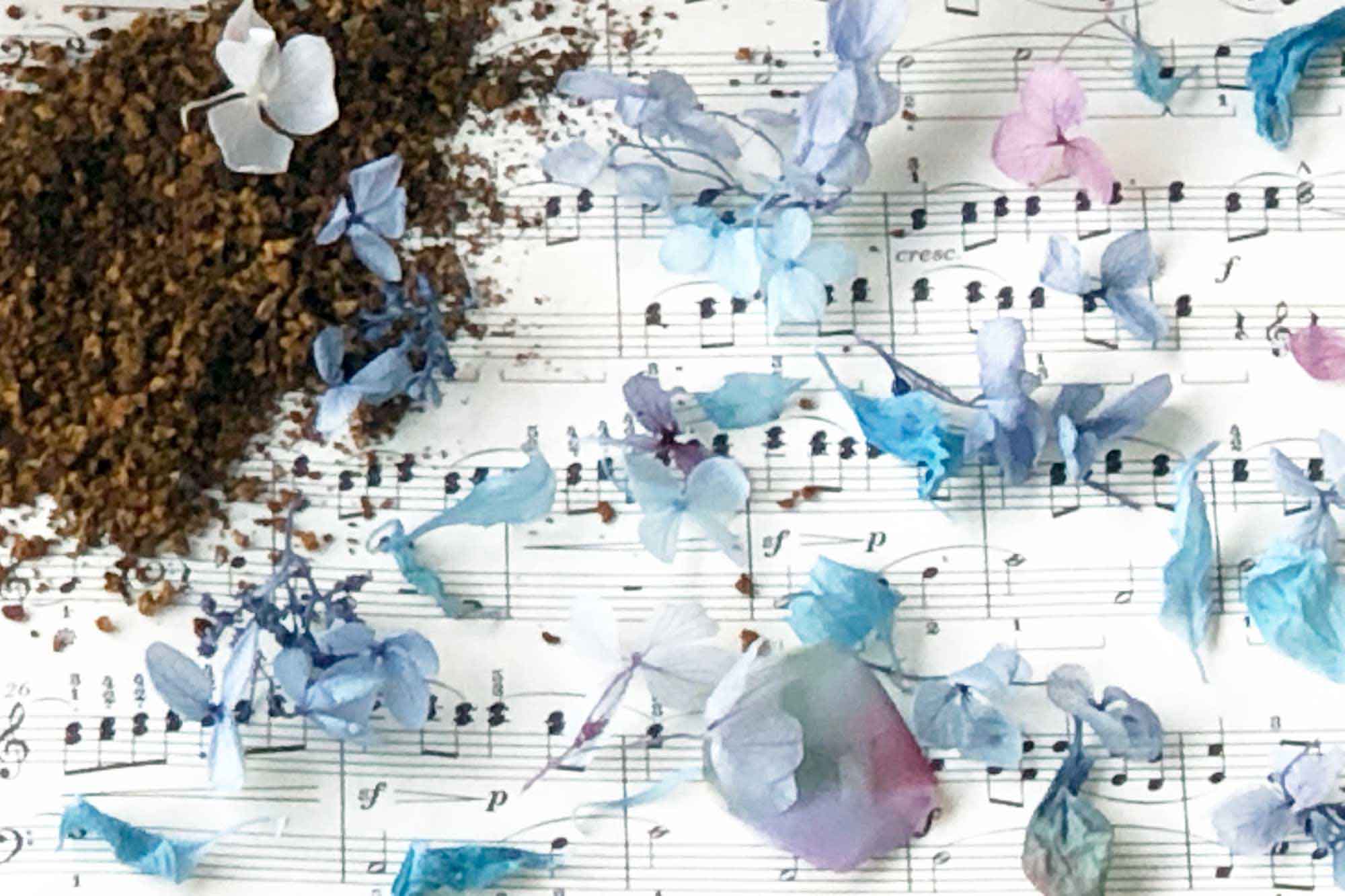 Inspection based on Ministry of Health, Labor and Welfare guidelines

Chaga, the raw material of RETHÉ, is a mushroom. Mushrooms are known as foods with high levels of detection of radioactive cesium. As of the end of March 2020, many mushrooms are also listed as subject to shipping restrictions in the list of foods subject to shipping restrictions based on the Act on Special Measures Concerning Nuclear Emergency Preparedness.
Measures and current status of radioactive substances in food (Japanese only)
34 years (as of 2020) have passed since the Chernobyl nuclear accident in April 1986. Although the regulated nuclide, cesium-137, has finally reached its half-life period, it goes without saying that the amount of radiation emitted is only about half, and it still affects the human body. Russia, which is the origin of Chaga, is an area where the effects of Chernobyl-derived nuclides are a concern, so careful inspection is required.
Because RETHÉ is used as tea, the standard value is applied based on the data of the Ministry of Health, Labor and Welfare, "tea conforms to the standard value of drinking water after drinking after being manufactured and processed." Specifically, the passing standard value is 10 becquerels or less per kg, which is the standard for drinking water. 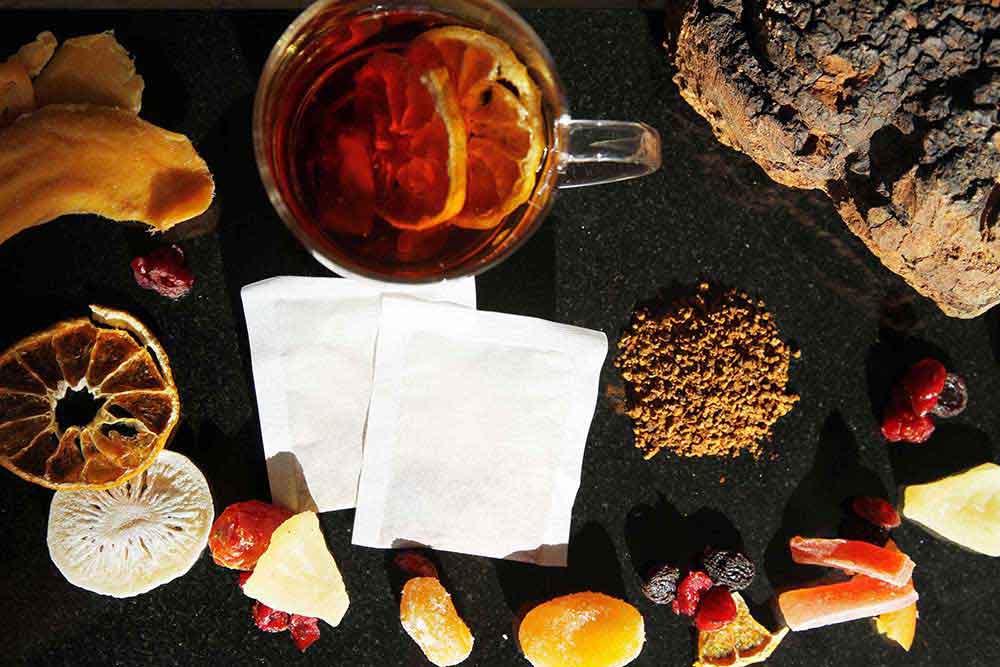 Because it is a natural product, we inspect 450 types of pesticides and radioactive substance detection inspection for each production.Chaga grows naturally on birch trees and grows over 10 to 20 years. Due to unpredictable accidents at Chernobyl and Fukushima nuclear power plants over many years, pollution such as PM2.5 due to environmental problems, the possibility of containing invisible harmful substances, and storage after harvesting There is a danger that it may be harmful to the body, such as chemicals.

The pursuit of quality in Chaga RETHÉ

The most important task of research in the pursuit of health and beauty is to prevent oxidation and glycation, which are the causes of aging and disease. RETHÉ is characterized by a special process using a patented method of manufacturing, in which the value of the SOD enzyme, which has an antioxidant effect, and the value of the AGEs suppression rate, which has an anti-glycation effect, were carefully selected. RETHÉ has been tested by the Japan Food Analysis Center with a result of 41,000 units/g. This value is as low as 900 units/g to 1,000 units/g for ordinary chaga, and the high concentration of SOD enzymes can only be reached by adding special processing. In addition, we have succeeded in reinforcing the effect of suppressing AGEs (glycated substances) which deteriorate proteins and cause diseases and aging by our original method. According to the test results of Japan Food Analysis Center, RETHÉ has obtained very strong results of AGEs (glycated substances) suppression rate of 70% at a concentration of 80 mg/mL. RETHÉ's commitment is to study the ingredients and manufacture products of reliable quality after repeated tests. 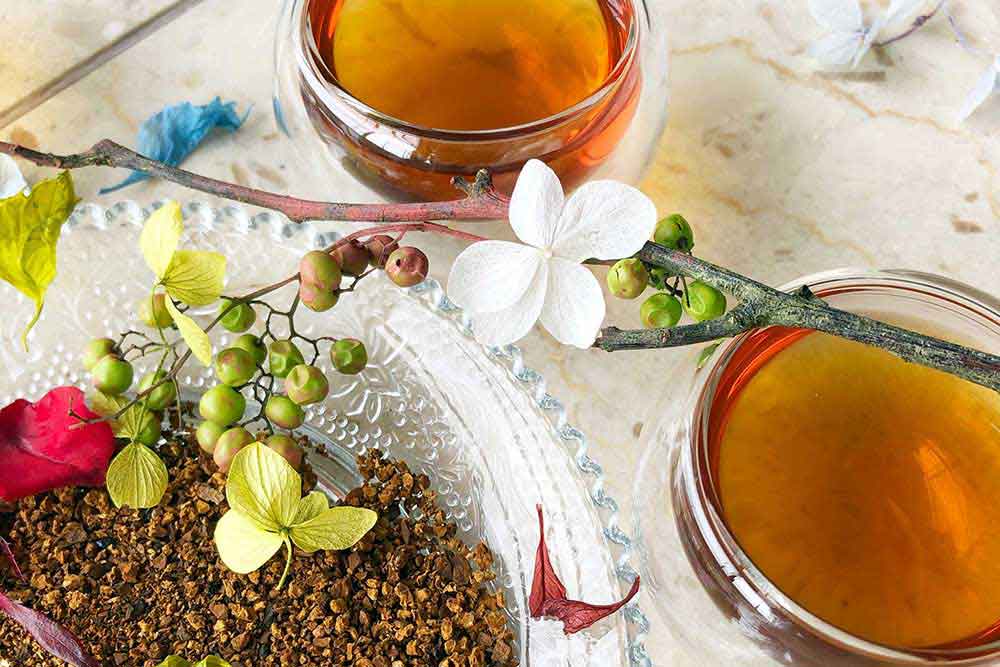 The β-D-glucan contained in Chaga has a structure that is a polymer in which many sugars are linked like a chain. Hence it has the character of being difficult to dissolve in water even when it is boiled. Destroying the cell wall of Chaga, is a special patent method which is done only by our company. This action allows the nutritions such as: β-D-glucans to be absorbed in the water. Once it has been absorbed in the water, it can be fully consumed and digested. 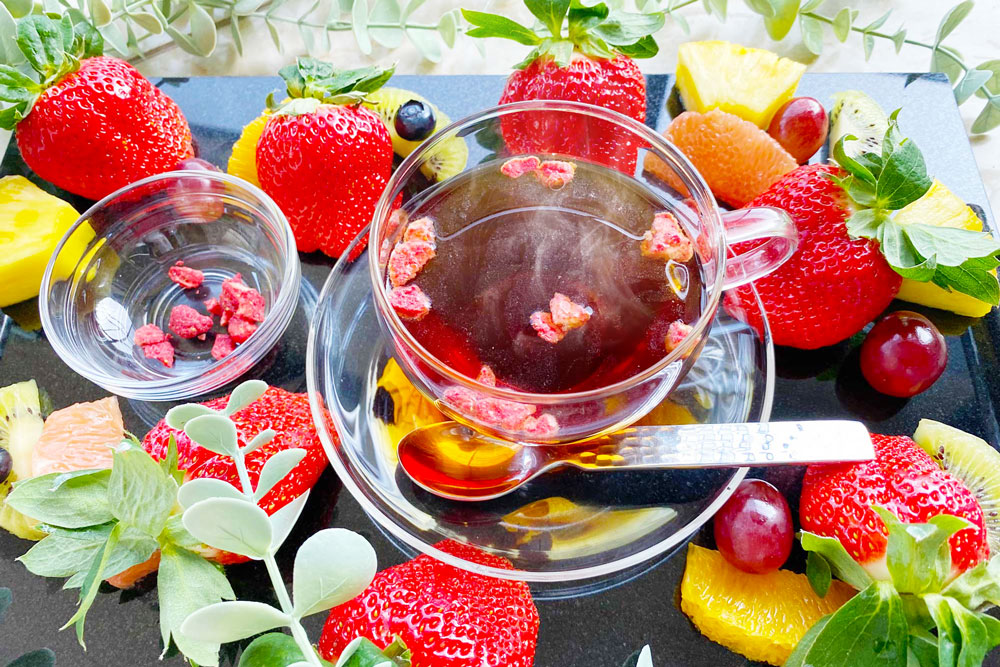 Chaga is rich in ingredients that are effective for the body, and the ingredients of particular interest are the suppression of SOD enzymes and advanced glycation end products of AGEs. At RETHÉ, we thoroughly inspect and analyze the materials used in our products, work to improve the highest quality, which is also the policy of the rejuvenation brand, and deliver it to everyone with the correct information.

The activity level of SOD enzyme is only about 1000 units in ordinary chaga chopped tea. (According to our research)

The SOD enzyme activity far exceeds 35,000 units by processing Chaga extract powder and cell wall destroying powder, and the test data recorded 41,000 units this time. (According to our research)

The great feature and attraction of Chaga is its surprisingly high SOD activity. As shown above, the SOD unit of Chaga is only about 1000 units of SOD enzyme activity. So what kind of thing is Chaga with 35,000 units, which is 35 times higher? The powder obtained by concentrating and drying the liquid boiled out of chopped chaga is the extract powder. One gram of the powder has SOD activity power of over 35,000 units. Of course, the powder which has 35 times the SOD activity power of chaga is very expensive. In our company's RETHÉ, we added the original processing of the extracts and the cell wall destruction powder, which is also a patented manufacturing method, to the original processing, and realized the strong SOD activity power of 41,000 units, which is not possible only with the chopped chaga, and a round taste with deep and rich flavor. 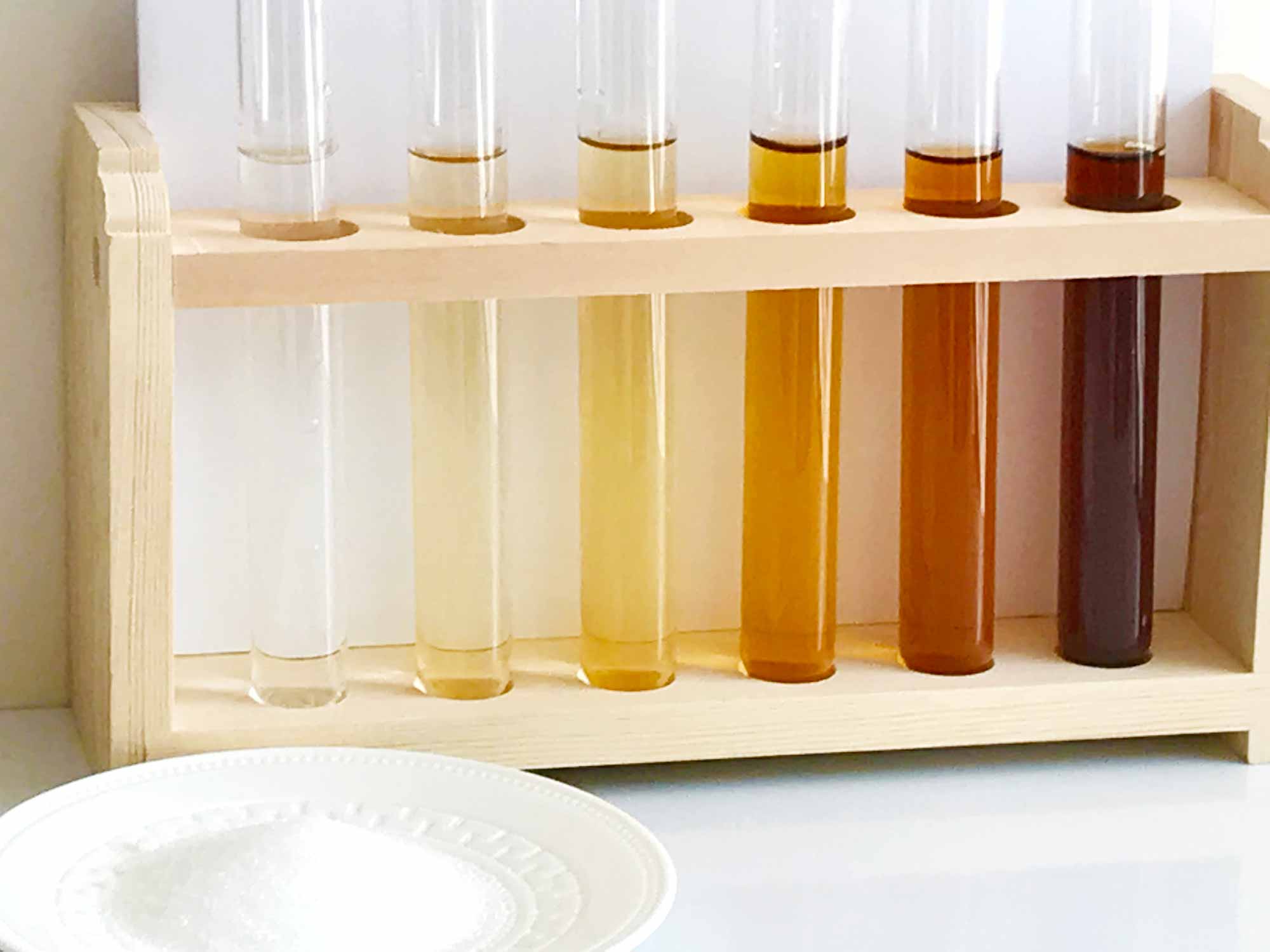 In the test data using ordinary chaga tickers, a 26% inhibition of AGEs production was obtained at a concentration of 100 mg/mL. (Our research)

Data from RETHÉ showed a 70% inhibition of AGEs production at a concentration of 80 mg/mL. (Our research)

Another major feature and attraction of chaga is the inhibition of AGEs (glycation end products). The inhibition of AGEs in chaga in its unprocessed form was found to be only 26% inhibition of AGEs, as mentioned above. By enriching the nutrients in the cells of chaga, Rite recorded a 70% inhibition of AGEs production at 80 mg/ml, the effective value for IC50 (the concentration at which the substance of interest can be halved; in this case, the concentration at which half of the AGEs causing glycation can be rendered harmless). At the Japan Food Analysis Center, we measured the amount of AGEs We humans eat carbohydrates as our staple food, and AGEs (glycated substances) are the substances that cause the body to 'burn' and age. When sugar is burned, it turns brown. The sugars that are not used as energy are combined with proteins to produce AGEs (glycated substances), which degrade various proteins such as skin, hair, blood vessels, muscles, organs, bones, and brain. Spots that appear after sun exposure are also caused by glycation. The phenomenon of glycation can cause bones to become tattered and brittle, and when it happens in the brain, it leads to Alzheimer's disease. When glycation occurs in the red blood cells, the hemoglobin A1c level becomes high, which reduces the amount of oxygen carried and makes it harder to deliver oxygen to the cells. It is important to control AGEs (glycated substances) from your normal lifestyle. 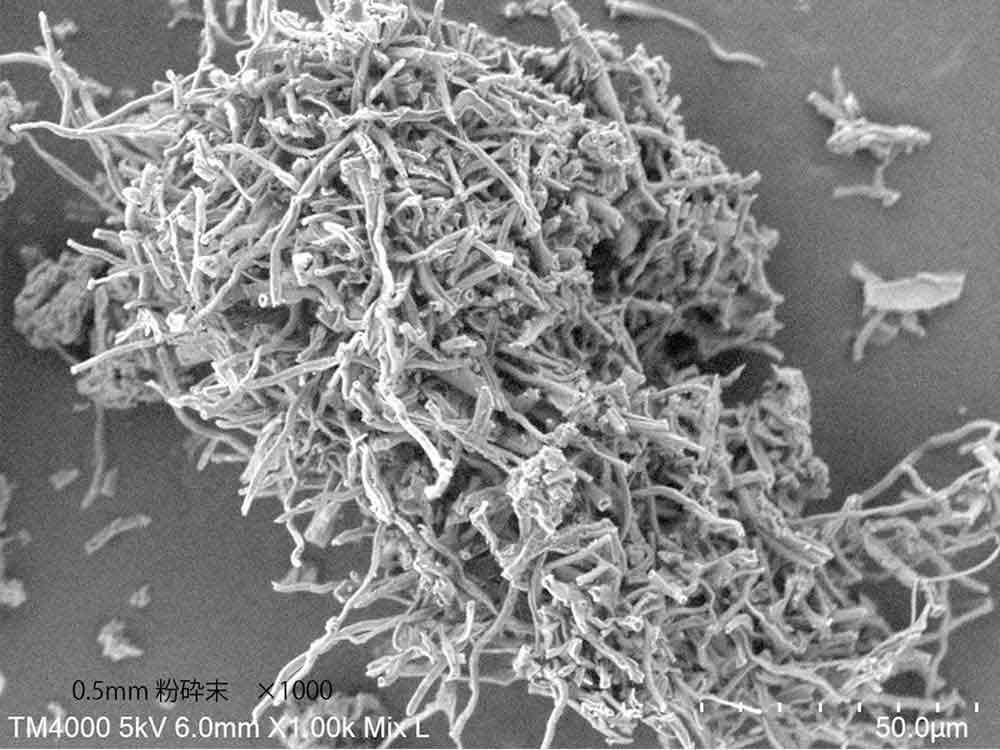 The crushed powder is a hard Chaga which has been crushed into a powder form. As you can see by comparing with the micrograph, the fiber remains the same state. The difference with the cell wall destruction is that you can not consume the nutritions such as; SOD enzyme and β-D-glucan. This is due to the method which crushes from the outside of Chaga’s cell. 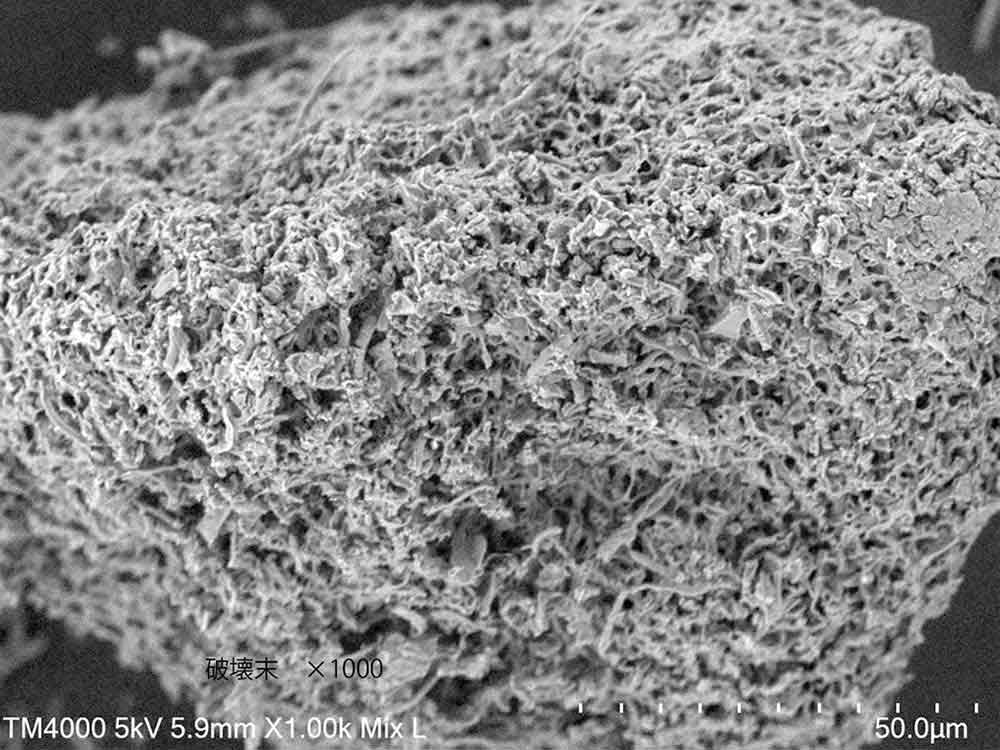 The cell wall destruction powder is a special process that destroys the hard cells of Chaga by applying pressure from the inside. As you can see from the micrograph, you can identify that the cells are finely broken into minuscule particles. The solid cells of Chaga contains various valuable nutrients such as β-D-glucan, lignin, and polyphenol, as well as SOD enzyme.

Learn more about chaga shapes and their characteristics here.

The cell walls of Chaga are so hard that they cannot be consumed and digested. In order to efficiently dissolve the nutrient components of Chaga in water, the cell walls of Chaga has been destroyed using special machinery and technology. By destroying the cell walls, various nutrients such as SOD enzyme, β-D-glucan, lignin, inositol, flavonoids, dietary fiber, minerals and vitamins will dissolve in water. After this process, you can enjoy the benefits of Chaga.

What kind of tea is Chaga tea?

A tea made from precious mushrooms that grow on a birch tree over 10 to 15 years.

Does Chaga smell or taste?

Chaga is almost tasteless and odorless, has less habit than bancha, and is easy to drink.

What nutrients does Chaga tea contain?

Chaga has a long harvest time of more than 10 years, so I am worried that it may contain chemicals such as pesticides.

I think that there are concerns about pesticides in everything that is boiled as tea, but RETHÉ conducts 450 types of pesticide detection tests for each manufactured product and provides safe products.

I hear that the black part on the outside of Chaga is more nutritious. Which part is RETHÉ made from?

Since RETHÉ extracts all the nutrients in the cells at high concentration, we offer products featuring more than 40,000 units of SOD enzyme, β-glucan, and high AGEs suppression, regardless of whether they are outside or inside. ..

There are RETHÉ dealers all over Japan. In addition, we are looking for corporate companies from many retailers and sole proprietors who can partner with us.